This year Wasson Nursery in Indiana is celebrating 40 years in business and the opening of its newest location.

In this industry, there is no shortage of incredible family stories, and Wasson Nursery in Indiana is one of them. This garden center may not be the oldest one out there, and it may not have third, fourth or fifth generations taking the reigns (yet), but don’t let that fool you. Dan Wasson Sr. started the business in 1977, and, with the help of sons Dan Jr. and Bob, the business opened its second location in 2008 followed by its third location this spring.

After spending a few hours at the grand opening of its newest garden center in Fishers, Indiana, I have one word to describe Wasson Nursery: momentum.

After the event I caught up with Bob Wasson, president of operations, to share a little bit more about the history of the business and why now was a great time to expand.

L&GR: Celebrating 40 years in business is a huge milestone. Can you discuss how you have gone from one location to three?

Bob Wasson: My dad started the business in 1977 in Union City, Indiana, which is a tiny, tiny town — it now has a population around 3,000 — that’s where he still lives and the original office is. We still do landscaping and lawn care and just a little bit of retail out of that store.

In the ‘90s, the Muncie area was starting to get built up and new home construction was on the rise. Dan and I had just graduated college, and we decided to build a new store in the Muncie area because that’s where all of our traffic was from.

So, in 2008, the height of the economic downturn, we opened up in Muncie a 10-acre garden center/nursery that complemented our landscaping services. It was kind of a scary time to open up a new store. Obviously we didn’t plan for the economy taking a turn for the worse, but 2008 was our best year ever up to that point and then going forward, each consecutive year has been our best year ever.

It was a great move to open that store up. Eventually we added more landscaping crews and then some of our other services to be routed out of that Muncie office, which now that office is our home base. It’s kind of our corporate headquarters. The business has continued to grow, and it’s allowed us to expand down to the Fishers area where once again we were following the same strategies.

There’s a lot more construction going on in the Hamilton County area than in the area surrounding Muncie and Yorktown where our current store was, so we’re kind of following the traffic and took a lot of stuff that we learned from opening up the Muncie garden center and applied it to the Fishers store.

Fishers has a lot more of a focus on outdoor living and fine gardening and indoor décor as well. Our whole goal behind the garden center is that we obviously want it to be a profitable business in and of itself, but our whole concept is we want to set it up to draw in customers and show them the cool landscaping-type work that we can do and convert these garden center customers into landscaping customers as well. L&GR: For the grand opening event, you brought in local wineries, breweries, bands and more. Do you plan on continuing these local partnerships throughout the year?

Wasson: What I want to spend the most marketing dollars on is getting people into the store. I think probably the best way to do that is to spend that money on the events and make each event a really cool experience that people are going to have a great time at and go back and tell five friends about how neat the place was, how pretty it was and how much cool product we had. I think there’s a lot better return on investment with your advertising/marketing dollars that you spend on actual events and customer experience versus throwing an ad in the newspaper or throwing an ad on a billboard. I feel like you’re wasting half your money — and you don’t know what half — when you do that kind of stuff.

With the events, you get actual feedback from customers. You get people tagging themselves on social media and sharing with their friends. And it’s not just the customers that come in but these breweries, wineries and bands too. They’re all telling their friends, family and fans on social media what they’re doing and where they are.

It expands exposure, and of course they’re going to promote the fact they’re out there at our store. It’s this network of community members that are all promoting the same event and you’ve got the power of leverage.

I love events, and that’s kind of our theme in Fishers. We want to do at least two big events a month. It’s just all about creating a customer experience.

Something we harp to our staff all the time is it’s all about reactions over transactions, so that customer experience is more important than any sale. I’d rather have someone come in and have a good experience. 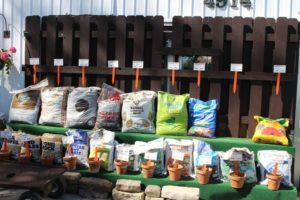