I’m sure that Bob Dylan wasn’t writing about the nursery industry when he wrote these iconic lyrics, but nothing better sums up what’s going on in the world of plants and in particular the world of shrubs. Surely, the times are a-changing! To illustrate this change, just get in your car and drive around some neighborhoods, both new and old, and note how the landscapes have evolved in relation to the age of the homes.

With each new generation, there has been a dramatic shift in the landscape, how and what types of plants are used. Color has increased; perennials have replaced the yews and junipers that were once so common. There’s been an overall increase in plant diversity: The ubiquitous crabapple and blue spruce have been replaced with a myriad of plant species. And as homes have become larger and built on smaller lots, people no longer have the space for big, old-fashioned shrubs. At first glance, one might jump to the conclusion that shrubs have seen their day, but in light of societal changes and new breeding efforts, I believe that shrubs are actually the beginning of a renaissance.

As the product development manager at Spring Meadow Nursery, my task is to find commercially viable plants for our company. My search for new plants takes me around the world, and I get to meet a wide array of professional and amateur plant breeders. I have the rare opportunity to see what will be new four or five years before the rest of the industry.

As a plant geek and horticulturist, I get excited when I see that one-of-a-kind new plant. It’s like searching for buried treasure, but my task requires that I exercise restraint and show good judgment. I search for new plant introductions that will meet the needs of growers, retailers and landscapers.

To sort through all these new plants and help me make sound introduction decisions, I’ve developed an internal plant selection criteria that helps me focus on those plants with the most potential. Let me be clear: Our criteria is not some sort of gold standard that everyone should follow; rather, it was designed to help our company find the plants that are right for our program. We have a clear vision for shrubs, and our goal is to reinvent the way people view and use them. Here is a sampling of what I look for when searching for new shrubs.

Botanically speaking, shrubs are perennials  they just happen to have woody stems. In layman’s terms, people view perennials as herbaceous plants with colorful flowers. Shrubs, on the other hand, have been viewed as the backbone of the garden: something green to plant in the background. This is not our view.

Plant breeders are developing new shrubs that are blurring our traditional lines of plant classification. My Monet (Weigela f. ‘Verweig’), Midnight Wine (Weigela f. ‘Elvera), Lo & Behold ‘Blue Chip’ (Buddleia x ‘Blue Chip’) and Petit Bleu (Caryopteris x clandonensis ‘Minbleu’) are all examples of miniature shrubs that look more like perennials. Gardeners and landscapers use them like perennials in borders, decorative containers and mass plantings. While these shrubs fill the same niche as perennials, they don’t require the same level of maintenance. There is no need for deadheading, dividing or staking. You don’t have to cut them back in autumn or spring. I recently read an article that described shrubs as the lazy man’s perennial, and there’s truth to that. People complain about a lack of time in this day and age, so the future for small and miniature shrubs is promising.

Some years back, I was responsible for producing more than a million perennials. The goal of the program was to provide retailers with bud-and-bloom perennials. Everyone knows that perennials sell a whole lot better when they’re in bloom, but unfortunately, most bloom for only four to six weeks. It was a difficult task shipping all these perennials before the blooms had expired. It was also difficult building weekly assortments with sufficient amounts of color.

The same lesson can be applied to shrubs: Shrubs with colorful foliage have a longer selling season, and when they do flower, it’s icing on the cake. In the past 10 years, we have seen a wide array of new shrub introductions with attractive, colorful foliage. Sunshine Blue (Caryopteris incana ‘Jason’), Chardonnay Pearls (Deutzia gracilis ‘Duncan’), Fothergilla x ‘Blue Shadow’, Diabolo (Physocarpus opulifolius ‘Monlo’) Coppertina (Physocarpus o. ‘Mindia’), Black Lace (Sambucus nigra ‘Eva’) and Wine & Roses (Weigela f. ‘Alexandra’) are just a few. Again, everyone benefits from the season-long color provided by these shrubs.

Some years back, I received a call from Gary Koller, a well-respected garden designer in the Boston area. Gary urged me to find and offer more shrubs with narrow, columnar growth habits. In his opinion, there was a need for plants with a smaller footprint. He also thought these shrubs would add interesting architecture to gardens. The trend toward smaller home lots dictates the need for smaller, narrower shrubs. After all, who has the space for a Spiraea x ‘Vanhouttei’ in their garden anymore?

A plant’s impulse appeal has become increasingly important in shrub breeding. Fewer and fewer retailers have sufficient help to actually sell plants. They’re looking for plants that sell themselves to generate more turns per square foot. I recently spoke with a retailer who was struggling with his shrub department. His sales figures told him that his color sales were increasing, but his shrub sales were stagnant. He liked the higher margins from his shrub department, but the slow-moving inventory was killing him.

After looking at his shrub offerings, it was easy to understand why his sales were slow. None of his offerings had any impulse appeal! Working closely with the buyer, I developed a series of seasonal end-cap displays that would make it hard for shoppers to resist. After all, research indicates that more than 80 percent of purchasing decisions are made while in the store. We concentrate on shrubs with showy foliage, as well as those with breathtaking floral displays.

Shrub breeders have long understood the need for bigger, sexier flowers, but impulse appeal at retail requires more. Most importantly, shrubs have to look good in a 3-gallon container. Floppy or wispy plants don’t present well and, as a result, don’t sell well either. Attributes such as fragrance, attractive fruit, fall color and variegated foliage all have a role to play in impulse appeal and can translate into faster sales.

For most people, garden space has become much too valuable for plants that shine only a few weeks of the year. People want and expect more than three to four weeks of flowers. Colorful foliage addresses this need quite well, but shrubs with interesting fruit and fall color fit the bill.

Brandywine (Viburnum nudum ‘Bulk’) is a good example of a shrub that earns its keep. The species typically needs to cross-pollinate with a second cultivar to produce fruit, but this cultivar does not. Its flowers are self-compatible, so it fruits abundantly without a pollinator. It’s a workhorse of a shrub that gives season-long pizzazz.

Shrubs that rebloom, by their very nature, offer multiple seasons of interest. With the success of plants like daylily ‘Stella d’Oro’ and Endless Summer hydrangea, we have continued to look for shrubs that rebloom. This spring, we will be introducing Ghost (Weigela f. ‘Carlton’), which has iridescent, butter-yellow leaves and dark cherry-red flowers that appear in spring and repeat continuously until frost.

Superior Performance and Ease of Care

It should be noted, that no matter how colorful, sexy or big the flowers, everyone expects that a plant will perform. Long gone are the days when people were willing to spray their plants to keep them healthy. Just look at the rose market: Flower Carpet, Knock Out, Oso Easy and Home Run roses do not have the big, showy flowers of a ‘Queen Elizabeth’ rose, yet they’re in high demand because they’re easy to grow. People want plants that are going to live, plants they can count on.

Sure, there will always be die-hard gardening enthusiasts who enjoy the challenge of growing Himalayan blue poppies, but according to the National Gardening Association, 81 percent of the population is made up of casual, reluctant and otherwise nongardeners. It’s unfortunate, but most of these people do not know how to prune a shrub or amend soil pH  and they have no desire to learn. If we want to sell plants to the majority of the population, we have to give them plants that are easy to grow. New shrub breeding is providing just that.

As you can see, plant breeders are reinventing shrubs to meet the needs of today’s growers, retailers, landscapers and gardeners. European breeder-rights laws and U.S. plant patents have given breeders greater incentive to develop new shrubs. The pace is quickening, but new is not necessarily better. The patent books are full of plants that no one wants.

It takes a lot more than larger flowers to be successful in today’s market. People are demanding more. And as Bob Dylan says, “The times, they are a-changin’,” and so are shrubs. In my view, they’re no longer just the bones of the garden. New shrubs are changing the way we grow, sell, garden and landscape. The future looks very bright, indeed!

Tim Wood is product development and marketing manager for Spring Meadow Nursery, Inc. He can be reached at [email protected] For more information on Proven Winners ColorChoice plants, visit www.colorchoiceplants.com. 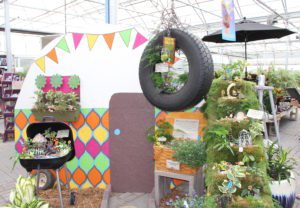