Congratulations to Distinctive Gardens in Dixon, Illinois, for earning the title of 2018 Merchandiser of the Year.

Lawn & Garden Retailer introduced you to Distinctive Gardens as the 2016 Merchandiser of the Year when owners Bud and Lisa LeFevre decided to completely transform their garden center after 17 seasons of business.

That was the year they debuted a shop story concept, where drastic changes are made and a new theme is introduced every few months. Fast-forward two years and Distinctive Gardens beat out the competition once again, this time with its “Create” shop story.

The “Create” concept officially began in January, although the idea had been years in the making when Bud, Lisa and their team started noticing customers buying small succulents often as gifts.

“We thought it would be super cool to have a really simple, easy-to-engage display that gave shoppers choices,” Lisa says. “The original idea was kind of a gift station where you could personalize things.”

In January, Distinctive Gardens’ retail store is closed, so the team got together for what Bud and Lisa called R&D Week, with pizza and beer.

“We were all taking materials, playing and seeing if we could come up with some ideas that we could then the following week execute and create quantity to actually sell,” Lisa says. “We had several different thoughts that each of them came up with, and as far as being able to differentiate in the market, that’s pretty much a no-brainer.”

“There weren’t mass quantities of anything so what it does is it makes people appreciate what you have more plus it makes them come in and say, ‘I want to get one of those before they’re gone,’” Bud says. “The towel planters were by far the big winners. You take an old dish towel and mix up some cement and put it in there to make a planter, and then Lisa does her thing with the succulents.”

Alongside these one-of-a-kind pieces was the heart and soul of the “Create” story: the U-Create station. First you pick a pot, then a plant, and finally decorate and tag a bag.

“When we launched it, it was well received, but it was just amazing how when people started to come in or chat about it online, they’re tagging their friends, and we started hearing Mother’s Day and kids,” Lisa says. “We were like, ‘Oh, OK.’ What we were thinking is not what they were seeing, and what they were seeing was even better than our idea I think.”

For Mother’s Day weekend, Distinctive Gardens added a second replica U-Create station in one of its greenhouses — in addition to the U-Create wall in the garden shop. The station in the greenhouse actually ended up being more kid-friendly because children who were only 5 or 6 years old could reach it, according to Lisa. “The thing that really struck me was that if we wouldn’t have been conscious or paying attention to what customers were talking about and wanting to do with it, we would’ve missed this all together,” she says. “I think that’s pretty fun in retail anyway. You put an idea out there and then people just kind of make it their own, and then you have this reciprocal relation I suppose you could call it where it keeps the momentum on being able to stay relevant.”

The answer may seem obvious, but Distinctive Gardens has had succulents from day one of the business, 20 seasons ago, so that begged the question: “Why now?”

“We all know succulents are a big thing right now and there are so many positives about it because it’s kind of a gateway drug for gardeners. We saw younger people in their 20s who started in the succulent area and then started moving into color annuals, so it’s an entry point,” Lisa says.

“Especially for college kids, boy oh boy, these little things are just the hot ticket. You can bring a plant into your dorm and have that experience of being surrounded by living things, and it’s not a huge commitment.”

Bud and Lisa acknowledge how succulents have changed over the years though, and they’re really working hard on making sure to suggest appropriate varieties — not just blanket succulents — for indoor use or certain care requirements. “I’ve seen as an industry, we’re just trying to catch up in order to provide accurate and helpful horticultural information because one thing I’ve noticed change in the last three to four years is that people are starting to ask more specific questions,” Lisa says. “Prior to that it was ‘Oh, I love it and I’m taking it.’”

This can be a challenge for garden centers when many growers offer succulents in mixes that aren’t identified or tagged by variety, making accurate culture information less readily available.

Succulents’ “cool factor” and ease of care appeals to a broad scope of ages and gardeners as well.

“You can be an artist with these things, and not just what you can do with petunias,” Bud says.

“It’s an arrangement game, and that’s part of the fun for people too,” Lisa adds. “There’s an instant gratification element to these. In some instances, it’s not so much about watching and enjoying the process of that plant developing; it’s more of a thing where it’s beautiful right now, and I’m going to stick it on my desk.” In a retail climate of reducing selection and inventory, Distinctive Gardens has found an opportunity to be deep in certain things such as succulents, even talking about a woman who drove two hours from Chicago because she’d heard they have the best selection of succulents.

“Maybe two or three years ago we could’ve called it a trend,” Lisa says. “But it sure does seem like it’s sinking in a little deeper than it ever has in our experience in 20 years.”

Here’s what some of our judges had to say about Distinctive Gardens’ “Create” shop story displays: Will Heeman, Heeman’s: This is such a simple but brilliantly executed design and concept. Listening to your customer, taking everything you already had but make it super simple to shop and create something unique for themselves. The U Create sign and the use of blackboards and chalk help bring home a warm and modern feel that matches the idea and plants/products that are being sold. Steve Maddox, Bower & Branch: I was impressed with how they analyzed the space and created an interactive display that encouraged the customers to “dig in” and use it. Getting customers to physically enter a display and shop from them can be difficult. Meghan Owens, Proven Winners: The U Create area is such an awesome way to personalize gifts and the supporting digital marketing is fantastic. I also love the customer involvement, posting and blogging about the area, what a great testament to the experience! Stan Pohmer, Pohmer Consulting: This U-Create strategy did so many things right: it was consumer-driven and interactive. They didn’t limit their potential by only appealing to customers already in the store, and by encouraging the customer to create a finished product and gift, they leveraged incremental ticket value as well as increased margins. Christina Salwitz, The Personal Garden Coach: Incorporating the events directly with the display theme is a huge winner idea, and the sales figures prove it. Using trends and social media together made the 80/20 rule work beautifully here!

As Merchandiser of the Year, Distinctive Gardens will receive a Dramm 60127 Display, with a retail value of $1,400, and a $500 Wholesale Gift Credit from Braun Horticulture and 15 percent discount for Braun Horticulture’s 2018 Catalog offering (one time). PDF: 2018 Merchandiser of the Year Winner 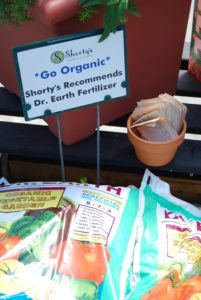