Home Nursery Inc., a family-owned grower of nursery stock and supplier to garden centers, landscapers and distribution centers, announced that it is celebrating 100 years in business in 2021.

The company plans to celebrate this significant milestone throughout the year with “100 Ways,” which are activities planned to commemorate its 100-year anniversary. Some of the actions will include recognizing and thanking employees and customers, philanthropic opportunities and giving back to the communities and the industry.

“We want to use our anniversary as an opportunity to thank and recognize everyone who has supported us, partnered with us, purchased our products, became our friends, helped us grow, challenged our thought process and pushed our limits,” said Ann Tosovsky, president of Home Nursery. “Without these people, we would not be here today celebrating 100 years of business and we want to honor all of those individuals and companies.”

Home Nursery was founded in 1921 by Ernest Tosovsky Sr., a Czechoslovakian immigrant who came to the United States as a boy. He began growing vegetables and berries in experimental hot beds and selling his products to the local community. Seeing an opportunity, he began to grow flowers, fruit trees and ornamental plants as well, and in 1928 he opened a retail store. His company continued to grow and his sons, Ernest Jr. and Chuck, continued the expansion. The company is now in its third generation of ownership with Ann Tosovsky, Ernest Sr.’s granddaughter, as president.

“My goal for Home Nursery is to continue the great work that began with my grandfather,” Tosovsky said. “We aspire to be the best grower in the Midwest by staying relevant to our customers and providing exceptional customer service, while making sure our plant standards are at the highest level. We will grow the business for the next generation as well as focus on being a respected partner with our customers and vendors. Service has always been an integral part of who we are and we will carry on the tradition of giving back to our industry and community.”

Home Nursery expects to honor its 100-year anniversary with an employee celebration later in the year. Additionally, more information on “100 Ways” of celebrating the anniversary will be released throughout the year and posted on the website at www.homenursery.com. 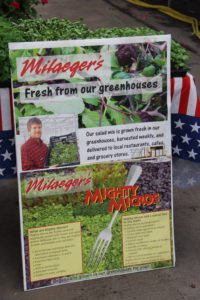