Terra Nova Nurseries has released a new geum video as part of its ongoing “Terra Nova Varieties View” series. The new video showcases a series of geum varieties named the Tempo series. Chuck Pavlich, Terra Nova’s director of new product development, is featured in the video sharing his insight about the series and its three colorful varieties. 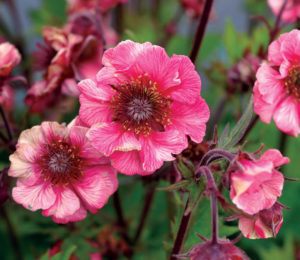 The geum Tempo series was showcased as part of the video program because it demonstrates the company’s problem-solving geum breeding. Terra Nova realized the common problem of poor-quality foliage among most geums in the market, and solved it by breeding the geum Tempo series to have a spectacular foliage. Pavlich explains in the video that the series was bred to incorporate lush summertime foliage, appropriate flower height and a plethora of flowers.

Included in the series are Rose, Orange and Yellow. The varieties grow in a dense, compact and mounding habit, and bloom in early spring. They have an excellent bloom count and are long-blooming, allowing pollinators to enjoy the plants for months. USDA Hardiness Zones for the Tempo series are 5 through 9, and their exposure allows for full sun. They are deer resistant, pollinator attractors and easy to grow, and they perform well in edging, borders and mixed beds.

The video of the geum Tempo series can be viewed on Terra Nova’s YouTube channel as well as the “Videos” section of the company’s website.