Aralia ‘Sun King’ also has been featured in a brand new video. Pavlich showed the large, bright foliage as a special feature in the video. “It can quickly grow to be 6 feet tall, and its appearance changes from lemon colored in the sun to lime colored in the shade,” he explained.

Artemesia ‘Makana Silver’ has soft billowy, silver foliage that forms a mounding shrub, making it great for use in hanging baskets, mixed containers, borders and mass plantings. Pavlich explains in the video that its silver foliage is a result of having evolved in higher elevations on the island of Maui in Hawaii. ‘Makana Silver’ was selected as “Best Novelty” in the 2018 Annual Flower Trial Garden at Colorado State University.

Ajuga ‘Blueberry Muffin’ is an extremely vigorous, heavy-flowering variety that has small, yet thick, bronze leaves and blueberry-blue flowers. “It is probably the best flowering variety in the market,” revealed Pavlich in the video.

Fatsia ‘Spider’s Web’ is a desirable, rare evergreen that has broad, palmate leaves with white splashing and dotting. The variegation changes with the seasons and as the plant ages. According to Pavlich, it always has a flowy, spiderweb foliage effect in both sun and shade.

The videos of these bold, exciting varieties can be viewed on Terra Nova’s YouTube channel as well as the “Videos” section of the company’s website. Learn more at www.terranovanurseries.com. 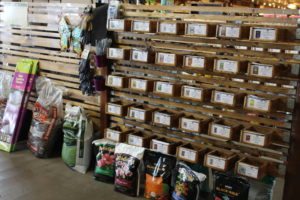