May 2022
Digital Payments on the Rise By Keith Loria

The use of digital payments started a few years before 2020, but once the COVID pandemic came along, these touchless payment options became a must-have option for any retailer doing business online, in person or both.

In fact, the report “The State of Retail Payments In 2020,” released by Forrester Research, senior analyst Lily Varon, revealed that 19% of U.S. adults used a digital payment in-store for the first time ever during the pandemic’s first few months. Additionally, 62% of consumers overall used a smartphone to make a contactless payment.

Leon Buck, vice president of government relations banking and financial services for the National Retail Federation shared that these numbers are just the tip of the iceberg of what’s been happening since, as digital payments have become the norm for many over the last year.

“It’s become a lot more popular,” he says. “We did a survey among our retail members a few months into the pandemic and almost 70% said they were now accepting contactless payments and that’s probably closer to 75%  now.”

What has really increased, he noted, were third-party wallet platforms like Apple Pay, Google Pay and some retailers even have their own.

“We wanted to keep our employees and their families as safe as possible and provide a safe experience for our customers,” says Owner Thomas Gallo. “They worked out better than we could have imagined and now we’ll be using them during the busy season from now on.” At the sheds, customers could pay with Tap to Pay chip readers, and since the machines are all customer-facing, the consumers could handle all of it themselves.

During the 2021 season, Country Mile Gardens only used the two checkout sheds for transactions, but this season, it has gone back to using the indoor register as the primary checkout spot and used one of the outdoor checkout sheds on busier days throughout the season.

“We will continue to do the same this season and for the foreseeable future,” Gallo says. “We will probably make the Plexiglas on the outdoor shed removable as it did hinder communication at the register a bit.”

In addition to providing a comfort level for those shopping, some of the benefits, he says, were increased checkout times, allowing the garden center to turn the parking lot over much faster than it normally could, solving a problem that often plagues the business during peak times.

“The sheds were absolutely worth the investment,” Gallo says. “Some things about the way we do business were forced to change due to COVID and a lot of them improved dramatically when we were forced to think about them critically.”

Dothan Nurseries, a retail garden center in Dothan, Alabama, also discovered that people were much more interested in paying with Apple Pay on their iPhones or through the touch-card method once they learned those were options.

“We’ve had it for a while on our card reader, but we didn’t even know, so there was no cost involved and it made things much easier during the pandemic,” says JD Boone, owner of the garden center. “I didn’t know people would do it and it’s not something we advertise, but more and more folks are paying in those ways.”

That means that the hand sanitizer by the register lasts a lot longer and the payment process is streamlined by 5-10 seconds per transaction.

“That might not sound like a lot, but that could be a big deal in a busy spring,” Boone says. “I’d say maybe 10% of people are using touchless options now, but two years ago, it was 1%, so it’s definitely growing.”

Today’s consumers, especially younger customers, prefer digital payments because they’re faster and considered more secure, and — when COVID first hit — were thought to be safer since they didn’t have to touch money that someone else had touched.

“The main pro is it’s easier and faster; you’re in and out of the store without having to go through a checkout person,” Buck says.

For retailers, using digital payments helps to give the customer more options based on what is convenient for them in the moment.

In addition to Apple Pay and the touchless credit cards, today’s retailers can also use Paypal Here and Venmo, where customers can scan QR codes that are posted in-store to pay.

Digital payments are not ideal, as stores sometimes have to deal with Wi-Fi connectivity problems, outages and delays that come after a purchase is rung up, with some taking a minute or two to say if the transaction actually went through.

There are also the different fee structures involved, which can hurt profits because tax is taken out differently for each digital payment solution.

Each fee structure is based on the provider, but there is typically a flat transaction fee, which can be lowered if a retailer reaches a certain sales threshold. The major providers are very upfront about their fee structures, but sometimes forget to mention how certain forms of payment can cause larger portions of fees to be deducted.

For example, when a store enters a card number as opposed to swiping or chipping it, the fee taken will be higher on that manual transaction for most.

Fees are the thing that retailers seem to care the most about, and each of the major digital payment providers — PayPal, Apple Pay, Venmo, and Zelle — have their own unique structure.

“Every time a retailer uses a credit or debit card, retailers have to pay an interchange fee and a processor fee,” Buck says.

For instance, Venmo charges a 3% fee when a credit card is involved, while Zelle and Apple Pay have a sliding scale based on the card used and the number of transactions a store has. PayPal, meanwhile, charges a 5.4% commission per transaction, plus $0.30 if the customer is from another country. But it’s generally considered the most secure by many experts.

For retailers thinking of offering digital payments for the first time, it’s probably best to start with the well-known providers to quickly build trust and a solid reputation.

Buck noted a store should update its Google business page, website and social media sites to reflect that it now accepts these new forms of payment, and that marketing is done in-store to get customers aware of what’s being offered and it may bring people back to the garden center.

PDF: Digital Payments on the Rise

Keith Loria is an award-winning journalist who has been writing for major newspapers and magazines for close to 20 years. View some of his recent work at www.keithloria.contently.com. 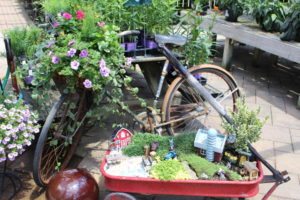