At the 2018 California Spring Trials in April, the breeding companies had some standout merchandising ideas sure to provide you with ideas for the garden center.

Nearly every stop throughout the trip featured combinations, whether annuals or perennials, ornamental or edible.
1. Sakata used sedums in many of its containers on display.
2. At Hem Genetics, we found tomatoes growing alongside violas,
3. while at Vegetalis, vinca and sweet peppers shared a container.
4. Green Fuse Botanicals emphasized its Rex begonias can be good in combinations whether for spring or with a poinsettia in the middle for the holidays. 1. Quality Cuttings Team displayed at the Pacific Plug & Liner stop, so it followed the rock band theme by planting up a guitar case, boom box and drum set with succulents that made for an Instagram- worthy photo.

2. The new line of Coral Creations succulents from Proven Winners got a lot of buzz. They are from the same breeder as Chick Charms and that whimsy comes through in the turtle caricature.

3. They are also meant to grow easily with an 8-week finish time for recipe success and lasting consumer impact.

4. Israeli breeder Jaldety put together a variety of sedums in one container with high impact on the bench. 1. Darwin Perennials’ large display focused specifically on fall and trying to capture some of those Halloween decorating sales, since it is the No. 2 retail holiday.

2. Dümmen Orange captured the year in its entirety from Valentine’s Day to Christmas with a combination of annuals, perennials, cut flowers, succulents, potted plants and more like in this Easter display.

3. Bushel and Berry launched a rebrand at California Spring Trials last year, and although you’re likely not growing berries year-round, it now has a section on the website dedicated to ideas after harvest such as these freezer pops. Making the walls of a greenhouse look picture- perfect is never an easy task, but the breeding companies had plenty of great ideas.
1. Benary used black-and-white banners to tell the history of the 175-year-old company.
2. Syngenta Flowers also went with black-and-white to make its Sunfinity sunflowers pop and
3. added some color with real surfboards for its new Cabrio calibrachoa line.
4. Pacific Plug & Liner had no shortage of colors with its “Welcome to the Jungle” theme featuring large banners of rock group puns and these great hellebore tire swing planters.

5. A fire station theme at Ball FloraPlant was fitting for its new Firehouse verbena series,

6. while at Sakata, ladders of ornamental cabbage, kale, cyclamen and more took your eye away from the greenhouse sides.

7. Lastly, Proven Winners had an incredible front door façade to imagine some of its combos in real life. 1. PanAmerican Seed’s new ‘SunBuzz’ helianthus is a potted plant sunflower with one massive flush and many additional flowers perfect for a gift.

5. Thompson & Morgan showcased a number of grow kits along with partnerships that include a free seed packet on a gift item.

Making a plant stand out is partially the job of POP.
1. Proven Winners launched its new edibles line named Proven Harvest, which includes new white pots for its two strawberries, two tomatoes and this Amazel Basil that is downy mildew resistant.
2. HilverdaKooij had a new scented dianthus, ‘Kaylee,’ on display, but what immediately caught the eye were these perfume bottle tags.

3. The Garvinea gerbera displays at Florist Holland had bees and butterflies in the pots along with this impressive Insect Hotel display to showcase their benefits for pollinators.

4. Using national programs to your advantage was the idea at Dümmen Orange with tags of the National Garden Bureau’s 2019 plants as well as

5. at Proven Winners promoting its 2019 National Plant of the Year program.

Carrying an idea from execution to a cohesive theme often makes as much of an impact as all the other categories we’ve looked at.
1. At Benary, this display paid homage to the Berlin Wall coming down, a huge part of the company’s history, and it was fitting for the Graffiti pentas line.

2. Terra Nova Nurseries had fun with a playground theme complete with a heuchera swing set, a lewisia seesaw, a new-variety roundabout and a picnic scene.

3. Cut flowers made a splash at Spring Trials this year, and American Takii showcased these alongside a Van Gogh poster in the same vein.

4. Ball Horticultural Co. had a number of “Shoot and Share” photo opportunities throughout its stop like this new Tatoo vinca display from PanAmerican Seed, including POP on the “airbrushed” petals and temporary tattoos for visitors. The Art of Simple and Creative Displays 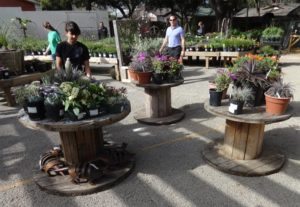 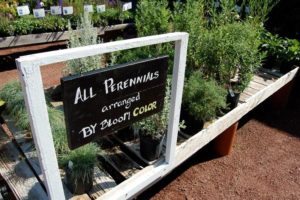