Spring came earlier than usual this year on Long Island, New York, when Hicks Nurseries hosted its 32nd annual Flower & Garden Show March 10-27. Built from scratch each year in a 20,000-square-foot greenhouse, the event provides ample room for visitors to explore the gardens while maintaining a safe distance from others. The production includes over 3,000 plants and 200 different varieties, some of which were forced to bloom in heated greenhouses prior to the show.

Eleni Roselli, director of marketing at Hicks Nurseries, says the show was inspired by a peer group that had several members that hosted a garden expo each spring.

“They would host their vendors and other local businesses for a weekend gardening event. Seeing their success, we decided to give it a try to get customers into the store pre-season and stimulate sales,” she says. “We invited our vendors in to speak directly to our customers and showcase new products. We featured small gardens that accompanied those booths.

She says the first show started in 1990 as a garden expo over one weekend, and later expanded into two weekends. The second weekend was called the “Horticultural Fair” and featured booths with local gardening clubs and organizations. Thanks to March’s unpredictable weather, the show was then expanded to cover three weekends and the focus was shifted to showcasing the gardens exclusively.

Roselli says the show has evolved into the garden center’s signature event, with seven to eight large-scale garden designs in full bloom in the 20,000 square foot greenhouse.

“It is our official kick-off to the spring season,” she says.

Getting the Word out Roselli says Hicks Nurseries spreads the word about the Flower & Garden Show in a number of ways:

In lieu of in-person seminars this year, Hicks Nurseries provided educational material on their website and YouTube channel. Garden advice was provided to their customers every day upon request.

Roselli has a few tips for garden centers considering holding a similar springtime event. “You need to find what will get your customers excited enough to get out when the weather might not be telling us It’s time to garden,” she says. “Our show gives us the opportunity to get the store set before spring and use that as an opportunity to stimulate customers early in the season. That only works in certain parts of the country, and you don’t need a “show” to do that.

“If you want to hold a similar event, set clear objectives for what you are trying to achieve. Make sure you provide your customers with a “wow” experience when they come into the store, and have a plan to integrate your sales and merchandising into the show experience. Also, given the cost to set up a show, you want to maximize the return on the effort and investment, so consider the length of time you will have it.”

PDF: Signs of Spring in the Garden Center Petal It Forward Day Is Oct. 19 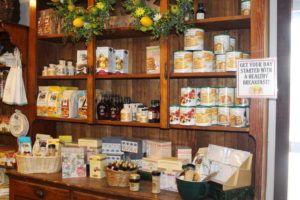