March 2018
Art in the Garden By Abby Kleckler

Calgo Gardens in Freehold, New Jersey, has created a retreat for its customers and multiple creative businesses.

Driving up to Calgo Gardens, I first noticed a large painter’s palette near the road, and I immediately knew I was in for a treat. A tour of the grounds from owner Mark Estomin unearthed one surprise after another.

Calgo Gardens is not only home to enchanting grounds, unique plants and a high-end gift shop (run by Mark’s wife and owner Penny Estomin) but also five like-minded businesses. “Our landscaping and our hardscaping are our bread and butter, but to support a nursery because of the box stores and what they offer and how they just take anything back, we had to diversify,” Mark says.

Change has been key to success for the garden center, which has been in business since 1948. A woman by the name of Charlotte Hirsch started it on a chicken farm in Ocean County, New Jersey.

“My parents had a chicken farm down the road, so when I was a kid I always helped there, and I really started working for her when I was in my late teens, so probably 1968 or 1969,” Mark says. “She taught me a lot and, in 1978, she said, ‘I’m going to retire; would you like to buy the business?’”

Mark purchased Calgo Gardens that year and has been evolving the business ever since, along with relocating north to Monmouth County in 2008. Adding ancillary businesses came naturally to Calgo Gardens. “My wife had a vision that she always wanted a community feeling atmosphere,” Mark says. “People who are in the gardens are usually people who love to be outdoors.”

A friend of the couple, Dee Duncan, started teaching yoga in the garden, and that turned into a whole other business for her.

The Yoga Loft now holds classes upstairs on the third floor of The Farmhouse on a daily basis. Downstairs in the same building is a completely separate business: Tulip Tree Café. The farm-to-table café came to fruition when chef Heidi Schulz walked into the garden center.

The popular breakfast and lunch spot has partnerships with local farms and serves farm-to- table dishes. Many of the greens and salads come from Calgo Gardens’ aquaponics farm. “We’ve been doing aquaponics for three years. It took us a year and a half to build, and then it again evolved,” Mark says. “I had a young boy come in, Cody [Parker], who said, ‘I’ve been here and have seen what you do. I’m interested in doing this.’”

That turned into Cody’s own business named Drop the Beet Farms. Cody rents the area from Calgo Gardens.

He is doing summer and winter farmers markets and a CSA, where people pay on a monthly basis and get their fresh greens every week. The grounds of Calgo Gardens are also home to Diana P. Photography. The flowering plants, trees and props are the backdrop for a number of photo shoots of children and families.

“Diana had a piano delivered and took photos of children playing the piano in the gardens,” Mark said. “She does so many things that are just beautiful.”

Diana also has an indoor studio on the second floor of The Farmhouse. “Dana has her own farm, but she’s moved a lot of it over to our place and does these great centerpieces,” Mark says. “She does something every week similar to a CSA where people can pick up flowers every Friday for the weekend. They’re just beautiful.”

The arrangements can be found from March through November in The Flower Shop and The Barn (gift shop) at Calgo Gardens.

For Mark and Penny the business is all about community, and many of the ideas come from their employees.

“I just give so much credit to the people who work for us because they’re innovative and they want to do things,” Mark says. “We try to let them open their minds and give us ideas.” An employee-driven initiative last year was the Monarch Butter y Haven, a way station for monarch butterflies, which will continue this season.

“The team let loose over 100 monarchs this year, and that was our rst year,” Mark says. “It’s so wonderful to do, since there’s a decline and we’re trying to bring them back.”

Twice a year Calgo Gardens hosts Art in the Garden, a long Saturday where 50 artists set up their tents free of charge.

“We clear out where we put all our shrubs and get local jewelers and potters and sculptors to come in. It’s a pretty neat day twice a year where we have to have police park cars because it gets so crowded,” Mark says. “It’s just about promoting art in the community.”

Music in the Garden made its debut in 2017, which bene tted Caregivers of Ocean and Monmouth County, an organization that promotes connection through music. “They found that if they gave Alzheimer’s patients their music from when they were younger, they came alive,” Mark says, “It’s all about giving back to the community. Both Penny and I learned that from our parents and what they did in their lives.”

The space truly showcases the company’s landscaping and hardscaping prowess along with its unique plants.

“We’re always looking for new and innovative plant material and owers that we can add into our landscaping. That’s what we’ve become,” Mark says. “We have that artistic air that even works with our landscaping because it’s always something new.

“My wife and I always have this saying: ‘What’s not to love?’ We’re outside, we’re with flowers, we’re with people, and we’re with gardeners. Just have fun.”

PDF: Art in the Garden Your Brand, Your Identity 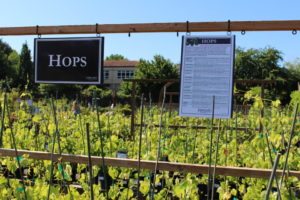