May 2012
The World’s Largest Hanging Basket By Pete Mihalek

The Garden Corner’s Jonn Karsseboom is one passionate guy. He’ll be the first to admit that he’s also a bit of a daydreamer. Sometimes when you mix those two characteristics, extraordinary things happen  particularly in this industry.

Take, for example, The Garden Corner’s most recent and most noticeable exercise in creativity  “The World’s Largest Hanging Basket”  a wrought iron hanging basket 16 feet tall and 10 feet wide, and weighing in just under 2 tons.

“First, I can tell you what it isn’t,” Karsseboom says. “It isn’t a marketing stunt. It isn’t that we’re starving for attention. It’s not about that at all.”

The Garden Corner is known for its hanging baskets, and as Karsseboom puts it, when you create enough of them and you start to dream about them, the thought of creating the world’s largest is a natural evolution.

“You start out climbing Mt. Hood here in Portland; then you move on to another mountain and then another mountain,” he explains. “Eventually you’re going to get to thinking about Mt. Everest if your passion is there.”

The “World’s Largest…” conversation started over nine months ago when Karsseboom did a Google search just to see if the world’s largest hanging basket actually existed. He found a few claims and photos to give him an idea of what he was up against.

With a little Google-prompted inspiration, Karsseboom got in touch with Don Sprague of Garden Gallery Iron Works and asked him if he could create something this grandiose.

“I asked him shape it as our crown planter, which is our hottest hanging baskets that he makes for us,” Karsseboom says. Sprague took the idea and came back to Karsseboom with the engineering costs. “To engineer this whole thing it would have cost us $180,000.” He decided to table the whole project … but not forget about it.

Karsseboom and Sprague took another look at their Everest and discussed ways to make it lighter and more affordable.

“We made a prototype at about half the size,” he says. “It was 5 feet wide and 10 feet tall. It worked out well.” So well, they pressed on and created The World’s Largest Hanging Basket.

Prior to the unveiling of the hanging basket, The Garden Corner didn’t have plans to host a press conference or invite the local news.

After producing the basket, Don Sprague made a call to the Oregon Association of Nurseries and its director of communications, Elizabeth Peters.

Peters said, “Oh, we’ve got to make this known.” In addition to her help, The Garden Corner team sent out a news release to get the word out and established contacts at the local news stations.

On Friday, March 23, four TV stations from the Greater Portland area were in attendance to see just what The World’s Largest Hanging Basket looks like.

“It was a nice little event,” the owner says. As for the permanence of this hanging basket, Karsseboom and Sprague both agreed, “If someone wants to buy the world’s largest hanging basket, then we’ll sell it to them,” he says. “But then our next one will be even
bigger.”

The Garden Corner is also home to the world’s smallest hanging basket, too. But owner Jonn Karsseboom thinks they can go even smaller.

“I think folks need a hanging basket that hangs on the rearview mirror of their car” or fits in the palm of their hand. “What is the least amount that we can do to give our customers the biggest impact?” he asks. “That’s a hanging basket.”

Let me explain… The World’s Largest Hanging Basket at The Garden Corner. 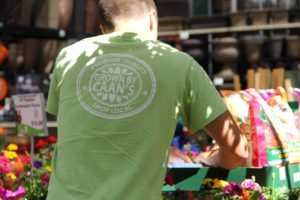