When low-price promotions didn't work, Pesche's Flowers took its print ads in a new direction  one that was much more personal.

After a disappointing return on last year’s print ad campaign, which consisted of low-price promotions and specific product pushes, Pesche’s Flowers in Des Plaines, Ill., decided to go in a new direction.

“We needed a new plan,” says Chris Pesche, owner of Pesche’s Flowers. “We made a plan to tell people our story  what we’re about. Our business is knowledge and service and quality. We have more to tell than just trying to sell consumers a box of Miracle-Gro for a
dollar cheaper.”

Face to a Name

The new ads for 2012 have panache and showcase the real people behind this locally-owned garden center. They are a little more “in your face,” literally, and Pesche wouldn’t have it any other way.

“Sometimes you have to be a little bolder, a little controversial to get people to come in,” he says. In Pesche’s Flowers first print ad (see figure 1) of the spring season, Chris is featured front and center with his colorful garden center behind him. The ad reads:

This is the face of Chris Pesche, a 3rd-generation American garden center owner whose family has been in business since the Great Depression. He works 120 hours a week, provides the biggest variety and best quality plants in Chicagoland and supports his local community. He employs people who are knowledgeable about plants and who can help solve problems. Chris Pesche does not sell screwdrivers, drywall or gallons of paint. Do you know the faces behind the Big Box stores? Neither do we. Shop quality. Shop independent. Shop Pesche’s.

“This kind of stuff rolls off my tongue every day,” Hermanson says. “I try to be as concise as I can. My wife is a school teacher, so she helps me cut out the unnecessary.” Hermanson says his experience at Second City  Chicago’s famous improvisational comedy enterprise  is a large contributor to his quick-wit and compelling writing style.

“We’re telling our story and it’s important to keep that story consistent,” he says.

In keeping it consistent, two additional ads have succeeded Chris’. The second one (see figure 2) is of Dr. Wally, Pesche’s “resident on all things plants, pests, fertilizers and keeping your lawn beautiful,” the ad explains. It goes on
to read:

… He actually knows and uses the products he recommends … if you want real solutions and not just random guesses, come to the experts at Pesche’s. Have you ever seen a Dr. Wally at the Big Box stores? Neither have we.

The third and latest ad (see figure 3) features a photo from the 1940s of Frank Pesche, the founder of the family business, with his seven sisters in a greenhouse. It reads:

This April, (Frank) turned 85 years old and still comes to work every single day. He is a true American success story. Does he vacation around the world, live in a mansion or follow the stock market? No … he’s a regular Joe who still only lives a couple of blocks away and likes to watch the Cubs’ games on WGN. He built the business through two world wars, the invention of the television, the civil rights movement, Sinatra, Elvis, The Beatles, hippies, preppies and yuppies. Most Big Box stores haven’t even been around for half as long as Frank’s been alive.

“A lot of people have said we’re making bold statements with these ads,” Pesche says. “It’s no different than a movie star getting pulled over for driving recklessly on the highway. He wants to get pulled over. He wants people talking about him. We’re trying to be a little controversial to make people say, ‘Hey, Pesche’s, I’ve heard
about them. Let’s see what they’re all about.'”

Pesche’s newspaper ads run in the main news of the Chicago Tribune, which reaches all of its Chicagoland circulation, and in The Daily Herald‘s Home & Garden section. As for reaching new customers, Pesche says the new ads have worked extremely well.

Some new customers have made the trip from Springfield (200 miles south) after seeing Pesche’s Flowers new ads.

Hot Off the Presses

When Chicago’s Mayor Rahm Emmanuel announced back in January (2012) that the NATO Summit was coming to the Windy City in May, Chris Pesche sat up in bed with a bright idea.

“It hit me … NATO, riots, protests, front page news coverage,” Pesche says. “Right away I said I want four front page strip ads in the (Chicago) Tribune during the event so people can see the Pesche’s name. Who’s not going to pick up a paper when all this commotion is going on in the city?”

In the end, Chris’ expectations on visibility and feedback came to fruition. Going forward, he will be on the lookout for another opportunity like this, should it present itself.

“The timing was right and I decided to take advantage of the situation.”

When low-price promotions didn’t work, Pesche’s Flowers took its print ads in a new direction  one that was much more personal. 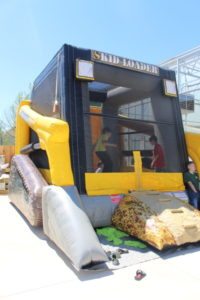